PLUMS AND DAMSONS—BUSH AND STANDARDS 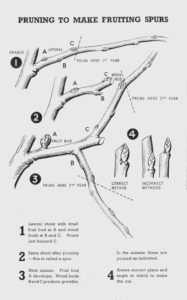 Unless absolutely necessary, do not prune stone fruits, owing to the tendency to ” gum ” and the danger of disease. Prune plums and damsons in late spring or early summer, sawing out any diseased, dead, broken or rubbing branches. “Dead” branches should be cut back to healthy wood, that is, wood showing no brown stain.

In removing large branches take off close to the main branch. A few cuts of the saw are made on the underside of the branch, to prevent damage by the bark being stripped off when the branch falls.

To speed the natural healing process, pare the cut surface with a sharp pruning knife, and paint with white lead paint to seal the wound against the entry of disease. This painting is very important with stone fruits and should be done immediately the wound is made.

Do remember this is a dig for victory leaflet from the Second World War and modern pruning practices have changed a little in some respects. White lead paint is no longer available to seal wounds in trees although you can obtain horticultural wound paint which does the same job.

Treat standard cherry trees as you would plums.

Before beginning to prune you must look for two kinds of shoots. “Leader” shoots are the main shoot growths that extend the branches. ” Laterals ” are the side shoots that grow out from the ” Leaders.” You must also be careful to distinguish between “wood buds” that form leafy shoots and ” fruit buds ” that form blossom (see Figs .1,2 and 3). The wood buds in apples and pears are thin and pointed (see B and C, Fig. 1), while the fruit buds are plump and round (see A, Fig. 3) and more usually formed on short spurs close to the branch. Sometimes fruit buds develop along the shoot, or with “tip bearing ” apples on the end of short laterals.

Prune as soon as the leaves fall in autumn or at any time when the tree is dormant. Cordons, espaliers and dwarf bush trees are pruned by cutting back all laterals to three or four buds (see Figs. 1 and 2), and shortening the leaders to leave two-thirds of the current seasons growth, the cut being made just above an outside bud (see Fig. 4).
Prune old standard trees by sawing out all over-crowded and crossing branches, especially to open the centre of the tree so that sunlight can get to all parts of the branches. All dead and diseased branches or wood should be cut out. The way to remove large branches is described under ” Plums and Damsons.”

Espaliers and cordons may be summer pruned by shortening back the laterals to leave shoots with five or six leaves. Do not shorten the leaders. The time for pruning varies with district and season. In the south, pears are generally ready about the middle of July and apples about a fortnight later.

1 Lateral shoot with small fruit bud at A and wood buds at B and C. Prune just beyond C.
Same shoot after pruning —this is called a spur. 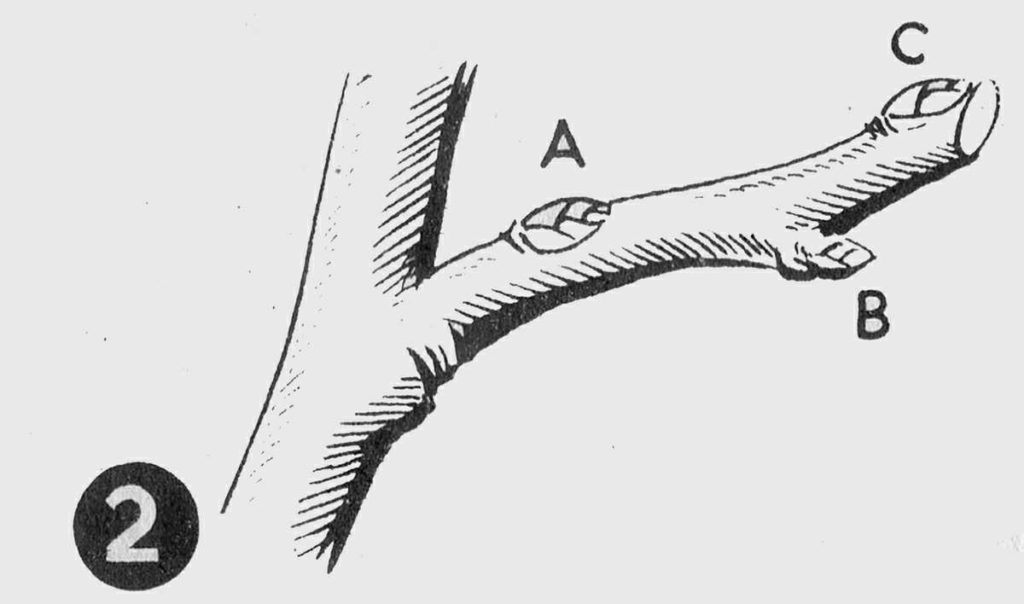 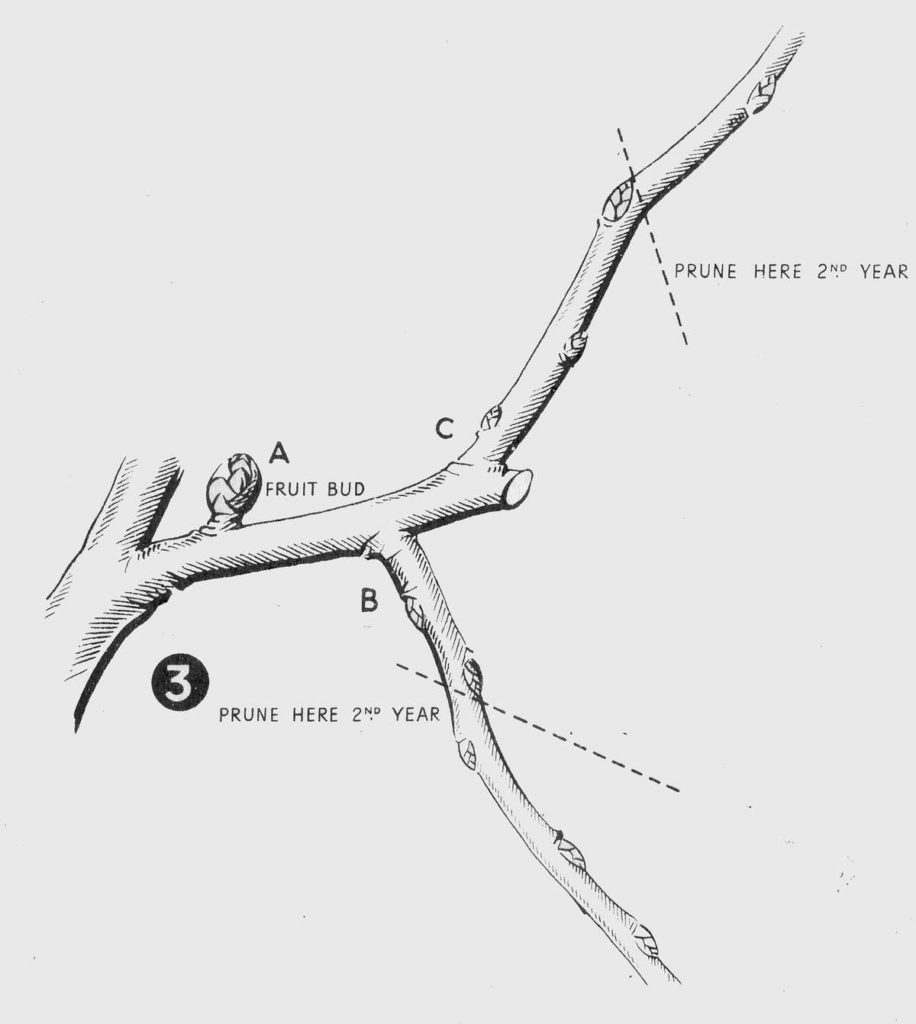 3 Next season. Fruit bud A develops. Wood buds B and C produce growths. In the autumn these are pruned as indicated. 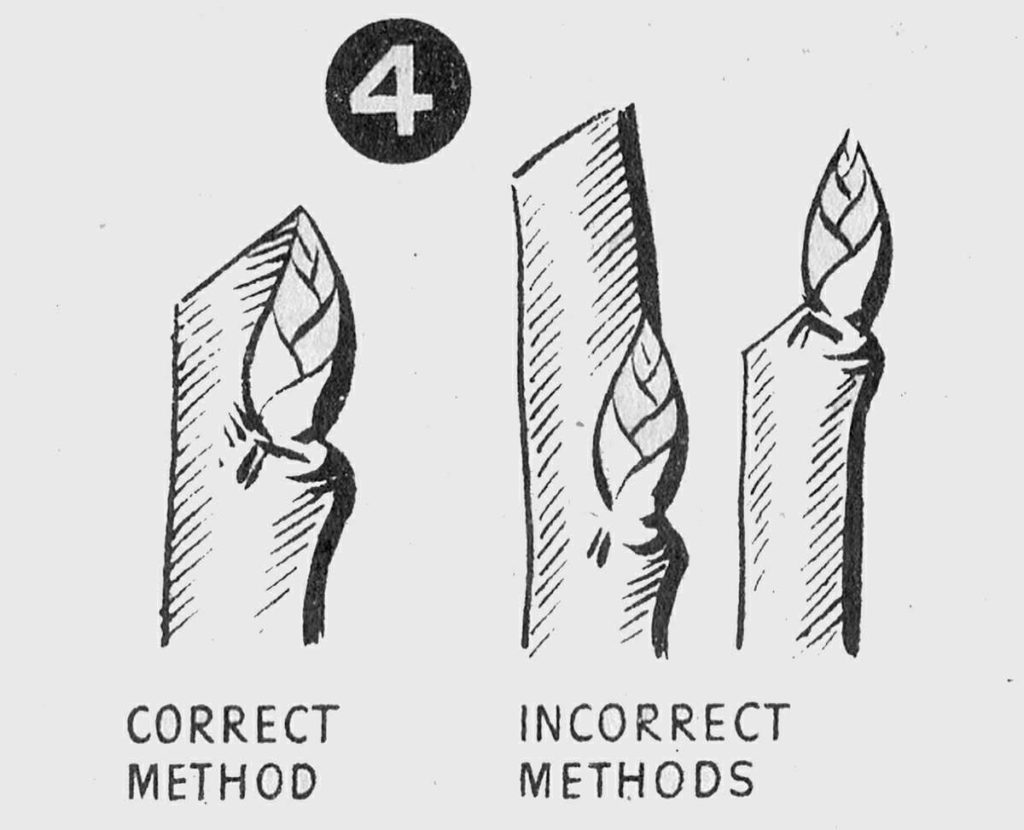