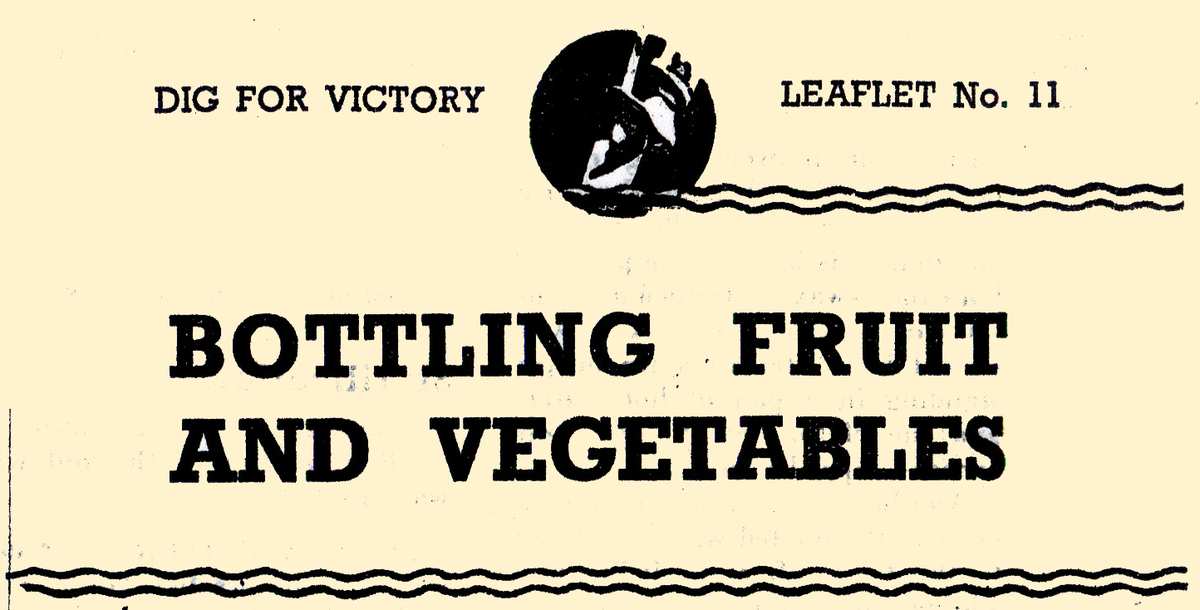 This dig for victory guide on bottling and canning fruit and vegetables gives good basic information on the subject. It’s a guide that you would have expected from the Ministry of Food but they were a little slow to get going on the advice front. Once Lord Woolton took over as Minister of Food from W S Morrison in April 1940, the Ministry of Food quickly caught up. 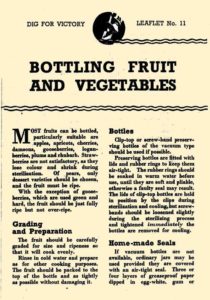 Originally this was a 2 page, 4 side leaflet but it fits well onto one web page.

The original leaflet (I also have the September 1941 copy) covered both canning and bottling but by the August 1943 version it purely covered bottling.

Canning (in the British use of actual metal cans rather than re-useable bottles) enjoyed some popularity at the start of the war after the USA shipped a number of canning machines which were required to seal the cans and the cans themselves.

As the U boat offensives increased and imports became more constrained, emphasis was given to bottling which can be done without special equipment and utilising re-useable glass bottles. Glass is more easily recycled as well. The metal industries were better utilised in making military equipment and munitions than food storage tins.

Canning, on a domestic scale, also has a higher failure rate than bottling – resulting in spoilt food.

MOST fruits can be bottled or canned. Particularly suitable are apples, apricots, cherries, damsons, gooseberries, loganberries, plums and rhubarb. Strawberries are not satisfactory, as they lose colour and shrink during sterilization. Of pears, only dessert varieties should be chosen, and the fruit must be ripe.

With the exception of gooseberries, which are used green and hard, the fruit should be just fully ripe but not over-ripe.

The fruit should be carefully graded for size and ripeness so that it will cook evenly.
Rinse in cold water and prepare as for other cooking purposes. The fruit should be packed to the top of the bottle and as tightly as possible without damaging it.

Clip-top or screw-band preserving bottles of the vacuum type should be used if possible.

Preserving bottles are fitted with lids and rubber rings to keep them air-tight. The rubber rings should be soaked in warm water before use, until they are soft and pliable, otherwise a faulty seal may result.

The lids of clip-top bottles are held in position by the clips during sterilization and cooling, but screw-bands should be loosened slightly during the sterilizing process and tightened immediately the bottles are removed for cooling.

If vacuum bottles are not available, ordinary jars may be used provided they are covered with an air-tight seal. Three or four layers of greaseproof paper dipped in egg-white, gum or paste ; or a well-fitting cork ; or a piece of cloth painted with a circle of wax. Paraffin-wax, if obtainable, is best for the purpose, but candle-wax or clarified mutton-fat can also be used. The wax should be melted in a tin or jar standing in a pan of hot water, and the cloth, held by the four corners, dipped into it.

Another method is to pour a layer of the melted wax directly on to the fruit, after sterilizing and adding the syrup.

These home-made seals are not suitable for immersing in a sterilizer, but may be used for the oven method or for pulped fruit, as described below.

Synthetic skins may be used. The directions given on the packet should be strictly followed.

The fruit may be bottled in water or syrup ; the latter keeps the flavour of the fruit better. The syrup is prepared by dissolving 1 lb. sugar in 1 quart water, bringing it to the boil and straining through muslin before use. If this amount of sugar cannot be spared, use as much as is available.

Fruit may be sterilized for bottling in any of the following ways :—

Any deep vessel, such as a fish-kettle, fitted with a false bottom, can be used if the temperature can be regulated. After filling the bottles with fruit and cold syrup or water, the lids and clips are put on, or if screw-bands are used, these are fitted but not screwed tight.

They are then placed in cold water and the heat raised gradually so that the maximum temperature (given in the Table below for the various fruits) is reached after 1½ hours. This temperature should be maintained for the time shown in the last column of the Table below.

The bottles should be removed, placed on a wooden table, the screwbands tightened, and left to cool.

The containers of fruit, without the liquid, are placed on asbestos mats in a cool oven (at about 250° F.) and heated until the fruit appears cooked (about ¾-1 hour). They are then filled with boiling water or syrup and sealed immediately. Pears, quinces and cherries need 1½ hours in an oven at this temperature.

The fruit is stewed until it is cooked with sufficient water or syrup to prevent burning, poured while still boiling into hot bottles, and sealed immediately.

As an extra precaution, the bottles, as soon as filled, are put into a pan of hot water (standing them on a fake bottom) and boiled for 5 minutes.

When the bottles are cold, the screw-bands or clips are removed, and each container lifted carefully by its lid to test the seal. If the lid remains firm there is a good vacuum, but if it comes off there is a fault in the seal, due to either

(a) insufficient sterilization or

Home-made seals should show a slight concavity, as they are drawn in by the vacuum formed in the bottle.

Tomatoes can be bottled by the methods recommended for other fruits, but particular care is needed over sterilising, and a longer time is required (see Table). When bottled in the oven, pack as whole unskinned tomatoes and sterilize for 1½ hours. Instead of syrup, water or brine is used.

For cooking, whole tomatoes are usually preferred. They can be bottled in their skins, or the latter removed by dipping into boiling water for ½ min. and then into cold, after which the skins will peel off easily. A brine made from ½ oz. salt to 1 quart water should be used for covering them.

This should be added before sterilizing if this is done in a sterilizer, or the boiling brine added after if the oven method is used.

Tomatoes in their own Juice

For soups, sauces, etc. this .method is more suitable. The tomatoes should be skinned as above and packed tightly into bottles either whole or halved. Then either :—

(a) stew some extra tomatoes in a pan with ¼ oz. salt and ¼ oz. sugar to each 2 Ib. tomatoes and use the juice to fill up the bottles, or

(b) pack very tightly in the bottles with a sprinkling of salt and sugar between the layers, but do not add any liquid.

Vegetables may be heavily contaminated with soil organisms, which often include the most heat-resistant forms of bacteria, and unless these are killed during sterilization they may cause spoilage of the vegetables in the bottle.

Bottling of vegetables is therefore recommended only if an autoclave or pressure cooker that can be kept at 10 lb. steam pressure is available.

Wash and prepare as for other culinary purposes. Grade for size and colour, and blanch by immersing in boiling water for a short time and then dipping in cold water.

The vegetables are packed into the bottles and covered with boiling brine (2-3 oz. salt in 1 gallon water).

The bottles are then closed in the usual way.

This should be done immediately after sealing, the instructions supplied by the makers of the pressure-cooker being strictly followed. Times for sterilizing are given in the table below.

Issued by the Ministry of Agriculture and Fisheries, Hotel Lindum—St. Annes -on- Sea—Lancashire.