Storing Vegetables for Winter Use DfV 3

STORING VEGETABLES FOR WINTER USE
DIG FOR VICTORY LEAFLET No. 3 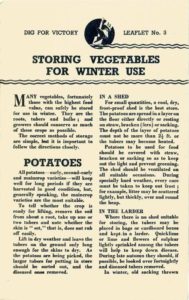 In this wartime guide from the dig for victory series, advice was given on storing the crops.

Those living in the countryside would most likely be well aware of how to store their vegetables to tide them through until the next year. The urban population was a different matter.

Not only had imports been curtailed by the German submarine warfare effort to isolate Britain; many of the warehouses and even shops had been bombed.

Transport from farm to town and city was no longer easy. Apart from the effects of bombing on the railway network – places like Crewe, a rail network hub, were heavily bombed – fuel for both road and rail was in short supply.

The urban population had to learn not to depend as much on the shops and learn the skills of storing as well as growing their own. There was, of course, some crossover between the Ministry of Agriculture and Fisheries and the Ministry of Food on the subject of storing food.

In fact there was probably a fair degree of competition and rivalry although one factor that helped sustain us through to eventual victory was that rivalry was nothing like that which existed in the German government and armed forces.

This, the first page from Dig for Victory Guide 3, covers the storage of potatoes to provide food through the winter months until the next season.

In this second page: Storing root vegetables; Beet roots, carrots, turnips, swedes and parsnips. Properly stored these vegetables will last the winter out.

This third page from the official wartime guide gives specific, detailed instructions for storing onions, marrows and pumpkins to last through winter

In the last page of the dig for victory guide no. 3: storing Jerusalem and Chinese Artichokes, cauliflowers, celery and tomatoes.