How to Prune Fruit Trees & Bushes – Dig for Victory Leaflet 25 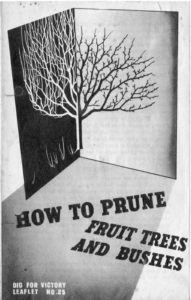 Fruit like apples would often keep well in store – depending on the variety. If not they could be dried for later use. Soft fruits that wouldn’t store for long could be bottled or made into jam, although sugar was rationed.

Remember that fruits are a valuable source of vitamins, primarily vitamin C. The aim of the government was to ensure the population, particularly the children, were healthy and health starts with diet.

One of the highest sources of vitamin C available was the rosehip. Children could earn themselves money collecting these in season. The government would then make rosehip syrup which was issued to mothers with young children. After the war concentrated orange juice was also supplied.

The original leaflet ran over six pages including the cover but I have split it into three pages for the web.

Do remember this is a dig for victory leaflet from the Second World War and modern pruning practices have changed a little in some respects. White lead paint is no longer available to seal wounds in trees although you can obtain horticultural wound paint which does the same job.

How to Prune Fruit Trees & Bushes 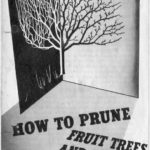 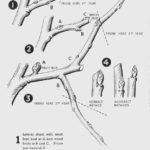 This section of the official wartime guide 25 covers the pruning of tree fruits including cherries, plums, damsons, apple and pear trees

More Information on Growing & Storing Fruit from the Dig for Victory series. 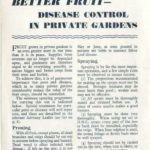 The official war time guide to disease control on tree and bush fruits produced as part of the dig for victory campaign to help improve fruit yields.