HOW TO MAKE BORDEAUX AND BURGUNDY MIXTURES IN SMALL QUANTITIES 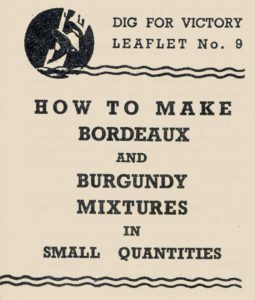 Bordeaux and Burgundy mixtures, copper based fungicides, are fairly effective against potato blight.

They were mainly superseded by more complex chemical remedies.

Burgundy and Bordeaux mixtures were organically approved until quite recently but are now delisted.

Now the organic grower can only hope resistant varieties will resist the strain of blight attacking and non-organic home growers have little in the cupboard to help them.

This 1942 article, from the Dig for Victory series of wartime growing guides, is only offered for its historical interest.

THIS is one of the most effective fungicides for use against Potato Blight, Leaf Spot or Blight of Celery, and Leaf Curl of Peaches or Almonds, as well as against a number of other diseases affecting mainly the foliage of plants.

The gardener and allotment grower may often find it more convenient to purchase one of these proprietary preparations, which are sold in the form of powders or pastes ready for mixing directly with water. Nevertheless, freshly made Bordeaux Mixture, prepared from the pure ingredients as described below, is often somewhat more efficient than ready-made sprays of the copper-lime type, as well as being cheaper, and may be well worth the little extra trouble involved.

Bordeaux Mixture is prepared from copper sulphate (bluestone), lime and water. The copper sulphate, which should be at least 98 per cent, pure, is best bought in the form of powder or granular crystals, as these dissolve much more readily in water than the large blue crystals.

Quicklime in lump form, fresh and free from impurities, was formerly the most common form of lime used, but nowadays, ” hydrated lime,” which, as sold commercially, is free from any gritty substances and possesses a high degree of purity, is more convenient.

It should always be used quite fresh, for the material soon loses its strength in bags that have been opened and kept for some time. Both copper sulphate and hydrated lime can be purchased in small amounts from shops supplying horticultural requisites.

The ingredients for making 2½ gallons of spray are :—

A wooden, earthenware, or enamelled bucket or other container to hold 2½—3 gallons is necessary, for copper sulphate corrodes metal vessels.

Measure out 2½ gallons of water into the container ; then pour off about a quart into an earthenware or enamelled jug, and stir into this the 4 oz. of copper sulphate. While it is dissolving, shake the 5 oz. of hydrated lime into the water remaining in the container and stir well.

When all the copper sulphate has dissolved, slowly pour the blue solution from the jug into the milk of lime in the bucket, stirring well all the time. The characteristic sky-blue colour of Bordeaux Mixture appears, and the spray is ready for immediate use.

Prepared in this way, the mixture should be quite safe for use on most plants. To make sure, the bright, clean blade of a penknife (not stainless steel) should be dipped into it for about a minute. If the blade becomes tarnished or darkened with a deposit of copper, more hydrated lime must be added.

A more sensitive test is to dip a piece of blue litmus paper, obtainable from a chemist, into the mixture. It should remain blue ; if it turns pink, more lime must be added.

Bordeaux Mixture should always be used the day it is made. It is best to pour it into the spraying machine through a fine gauze strainer or a piece of muslin, to prevent any clogging of the nozzle.

Similar to Bordeaux Mixture, except that washing soda is used instead of lime, this is probably still the most widely used potato spray.

The details for making the spray are similar to those given above for Bordeaux Mixture, soda being used in place of the lime. The proportions recommended are:-

The washing soda should be fresh and in crystalline form ; if it is old and broken down to a white powder, the soda solution made from it will be too strong.

Do not guess weights. Have the correct amounts of copper sulphate, hydrated lime, or washing soda weighed out in small packets.

The sprays should be applied before a disease makes its appearance, or at least in the early stages before much spread has occurred. They are preventive, not curative.

Spraying should be done before rain, rather than after, and it is more necessary in a wet season than in a dry one.

It is often necessary to spray crops two or three times during the growing season to renew the deposit washed off by rain and to ensure that new growth is kept properly covered. 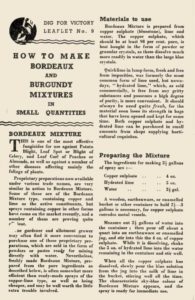 Spray on a fine day, so that the spray has an opportunity to dry before rain comes ; it will then stick much more satisfactorily to the surface of the plants. Do not spray if a frost is likely to be experienced the same evening.

Spray should reach the under side of the leaves, if possible, as well as the tops. If no sprayer or syringe is available, Bordeaux or Burgundy Mixture may be applied to potatoes by sprinkling from a watering-can with a fine rose, but spraying is preferable.

Spraying may prove injurious rather than beneficial in the neighbourhood of certain industrial towns, owing to interaction between substances in the spray and acid fumes in the air. Local advice should therefore be sought before spraying within ten miles from large industrial centres.