Garden Pests & How to Deal With Them DfV 16

GARDEN PESTS AND HOW TO DEAL WITH THEM

DIG FOR VICTORY LEAFLET No. 16 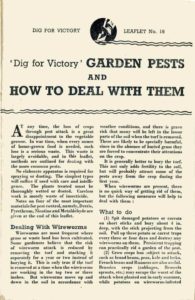 Pests have always been the bane of gardeners and this leaflet helped those wartime growers cope with them.

Nearly all the chemical controls referred to in this dig for victory guide have either been banned or at least de-listed. Some with good reason like nicotine which is a highly poisonous, indiscriminate insecticide.

Whilst modern growers may have a lot less in their chemical cupboard, we do have a better knowledge of how to control pests organically and biological controls are now available that were just not thought of then.

The original leaflet ran over 4 pages and I have stayed with that format but I’ve split the content according to topic rather than staying with the limitations of paper. My comments are in green.

Wireworms are a pest noted for being common in ground that was grassed - like many of the new allotments in 1941 when this guide was printed.

The second page in the 1941 official garden pest control guide for covered a wide range of pests. The controls suggested are chemicals, some are banned now

In this third page of the 1941 guide to dealing with garden pests, onion and carrot fly, pea beetles and weevils, potato eelworms are covered.

Insecticides in 1941 with notes from today

Page 4 of 4 from dig for victory guide 16 - garden pests - concludes by describing the main pesticides available in 1941 and how to make and use them,