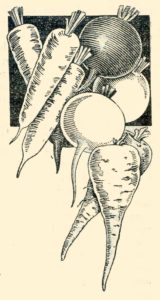 ROOT VEGETABLES FOR THE SMALL GROWER

DIG FOR VICTORY LEAFLET No. 6

CARROTS, parsnips, turnips, swedes and beet rank high in food value. They also have the great advantage that they can be stored for winter use. Their main food constituent is sugar, which forms a valuable source of energy.

And, although they contain little of the flesh-forming substances, they are of particular importance during the winter because of their richness in Vitamin C.

So rich are swedes in this health-factor that the freshly squeezed juice from minced raw swedes may be given to infants and children in place of orange juice.

Carrots have a special claim to a prominent place in our diet. They have a high vitamin-A potency, and because of this the carrot crop is able to make a valuable contribution to keeping up the standard of health through the trying winter months.

All these crops are easy to grow, easy to store and easy to cook. The carrot, the swede and the turnip can be eaten without any cooking. In fact, no winter war-time salad should be without a dash of carrot.

Good crops of root vegetables cannot be produced on poor soil in gardens and on allotments, but they are best grown on the land which was well manured last season. The soil should be deeply dug and well consolidated before sowing time. A well-worked, tilthy seedbed is essential; do not sow when the soil is wet.

All these crops, particularly turnips and swedes, do best on soil supplied liberally with lime. Phosphates and potash are also of special benefit. If available, a mixture of superphosphate and sulphate of potash should be well worked into the soil at the rate of 2 oz. per square yard before sowing. Wood ashes and bonfire ashes are beneficial too.

The seedlings of the turnip family are subject to attack by the Flea Beetle, especially in dry weather. A derris or nicotine dust, applied as the young plants are coming through the soil, is the best remedy.

There are early, second early and main-crop varieties of carrot, each varying in length and shape of root. For general purposes, a quickly maturing, second early, half, long or stump-rooted variety of the Chantenay type is most suitable.

Strains of this type are sold as Chantenay, Model, Early Market, etc. The type is coreless, smooth and of good rich colour ; stores well. Nantes, also stump-rooted, can be recommended.

If sown early, the thinnings of these varieties may be pulled and used as early carrots without detriment to the rest of the crop.

The first sowing of carrots (to provide roots for summer and autumn) should be made in April. The storage crop is best sown in May or early June. A later sowing in July will provide tender young carrots for use in October. Sow the seed thinly in drills drawn 1 ft. apart and about 1 in. deep.

Give a first thinning in the seedling stage and keep the bed free from weeds by the frequent use of the hoe. Carrots for storage should be lifted from the ground at the end of October. Lift carefully with a fork and avoid damaging the roots.

Varieties with round or globe-shaped roots of good, rich colour and which mature quickly are suitable for general cultivation. They are easier to boil in normal sized utensils. They are sold under such names as Crimson Globe, Crosby’s Egyptian Turnip-rooted, Detroit Dark Red, Model Globe.

Sow the earliest crops in April, and the later storage crops in May. The oval and long-rooted varieties require a longer period of growth than the globe-shaped sorts. The drills should be 11/2-2 in. deep and at least 1 ft. apart.

Sow the seed in small clusters 6 in. apart to save waste, and single the plants to one when three leaves have formed.

Birds will attack the seedlings, so give protection with a few strands of black cotton stretched above the rows.

Keep the beds free from weeds and harvest the crops for storage in early October as the roots are easily damaged by frost. Never pull off the tops ; screw them off with the hands.

Parsnips develop slowly, so should be sown as early as possible in March or even late February if the soil is suitable for working. Sow in drills 15-18 in. apart and from 1-11/2 in. deep, dropping the seed in small clusters 6 or 9 in. apart. The latter distance will give larger roots.

Thin the seedlings of each cluster to one as growth proceeds.
The land for parsnips should always be early and deeply dug, and worked to a fine tilth before sowing. This root crop keeps better in the ground than out of it, so is best left undisturbed until required for use.

Turnips mature fairly quickly and batches should be sown according lo the family’s needs from mid-March onwards until May.

Although there are garden varieties of swedes, such as Laing’s Swede, the field sorts are really the best to grow. They resist the cold better than turnips and can be left out until after Christmas. Swedes are often successful in districts where turnips are less satisfactory.

The earlier sown turnips will not keep, so sow for storage in June and early July. A later sowing in August can be left to stand the winter to provide small roots and a crop of useful turnip-tops for greens in the spring.

Swedes are sown later depending on the district. In the North, early May will be safe. In the Midlands and Southern districts, early June will be soon enough.

Sow both turnips and swedes in drills from 12-15 in. apart and 1-11/2 in. deep. Sow thinly. The seedlings should be thinned in the first instance from 4 to 6 in. apart, according to variety and size of root desired.

As with carrots and beets, turnips may be thinned by drawing young roots for use and leaving the others to develop.

Lift storage turnips in October. Swedes can be left in the ground until after Christmas.

Issued by the Ministry of Agriculture and Fisheries, Hotel Lindum, St. Annes-on-Sea, Lancs