DIG FOR VICTORY LEAFLET No. 14 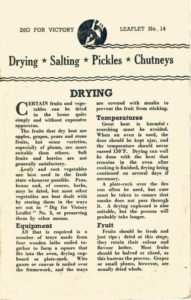 This concise but thorough guide on drying, salting, pickles and chutneys was published as part of the dig for victory series of leaflets. Logically, you would have expected it to have been published by the Ministry of Food rather than the Ministry of Agriculture and Fisheries.

I suspect the series (under a different title) may have been prepared prior to the outbreak of the war. Certainly the Ministry of Agriculture and Fisheries was planning for the inevitable conflict as early as 1937.

Food supplies were under the Ministry of Agriculture and Fisheries but were placed under a new ministry – The Ministry of Food – shortly after the outbreak of war. Initially they seemed to get off to a slow start under W S Morrison who was appointed Minister of Food.

In April 1940, Lord Woolton, of Woolton Pie fame was appointed to replace W S Morrison as Minister of Food and the department quickly got up to speed.

This leaflet originally ran over four pages and I have stayed with basically the same format, splitting the content on subject lines rather than the limitations of paper. My comments are in green.

CERTAIN fruits and vegetables can be dried in the home quite simply and without expensive apparatus. This wartime guide explains how to dry food for store.

This page from the dig for victory food preserving guide covers storing string or runner beans using salt. Salting has been used since pre-Roman times

This page from the wartime preserving guide explains the basic principles of making chutney which was ideal for enlivening the bland rationed diet.