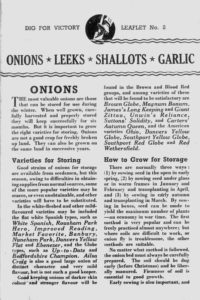 It’s a sign of the importance of the onion family that the second Dig for Victory leaflet was on how to grow and store them.

There’s a myth, often repeated, that garlic is some sort of foreign vegetable and was almost unknown and uneaten until recently. I’ve even been told that it was introduced to Britain after cheap package holidays made us acquire a taste for strange foods. I think this leaflet dispels that myth!

Onions do not have many calories to contribute to the diet but they are high in Vitamins C and B4 along with potassium, phosphorus and calcium. Perhaps most importantly onions added flavour and interest to a bland wartime diet dominated by the ration.

Onions, grown, harvested and dried properly will store for many months. Garlic and shallots can both last from harvest until the next harvest arrives.

The final member of the onion family covered is the leek. Once again a vegetable that is high in Vitamins, C & A in this case. Leeks are versatile in cooking and add an onion like flavour. They don’t store but can be harvested fresh from October through to the end of March.

This section of the wartime guide covers selection of varieties to grow for eating and storing along with the different methods of germinating.

This page from the official wartime growing guide covers preparing the soil, raising seedlings to plant out and onion cultivation.

In this section of the official guide, the dig for victory leaflet covers harvesting and storing onions. Onions need to be properly handled to store well.

The last page of the official guide covers Leeks, Shallots and Garlic. The leek growing method is the one I use, successfully, today.