POTATO GROWING IN ALLOTMENTS AND GARDENS
DIG FOR VICTORY LEAFLET No. 15 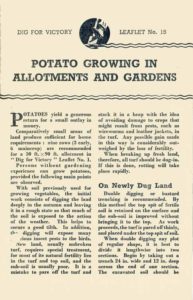 The potato has been a staple food for hundreds of years in Britain. It’s easily prepared for eating, just dig up and cook. It’s versatile and need not become boring as it can be cooked in many different ways. Potatoes can be: chipped, mashed, boiled, roasted and incorporated into nearly any meal.

Potatoes provide energy, they are around 17% carbohydrates and a small amount of protein so providing 77 kcal per 100 grams. They’re high in vitamins, especially vitamin C. In fact the potato contains nearly as much vitamin C as an orange.

They’re also relatively easy to grow when compared with grains like wheat and oats. Harvesting is simple, a fork being the only tool required on home scale production. They will store easily and well. One popular-in-wartime variety, Arran Consul, still has the longest dormancy of any potato. The Arran Consul stocks were always the last to be released.

When you look at the benefits, it becomes obvious why the humble spud was the most important home grown crop and arguably the most valuable crop for farmers to grow.

This first page of the wartime guide from 1942 discusses the expected yields from the potato crop and how to prepare the land, breaking new ground.

Selection and Preparation of Seed

This, the second page of the dig for victory official potato growing guide, covers the selection and preparation - chitting - of potato seed

This third page of the potato growing guide from 1942 covers the spring preparation for potatoes and the fertiliser requirements.

This last page in the 1942 wartime dig for victory guide covers early cultivation of the potato crop and touches on the major disease, blight