Saving Your Own Seed DfV 21

SAVING YOUR OWN SEED

DIG FOR VICTORY LEAFLET No. 21 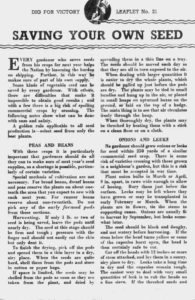 EVERY gardener who saves seeds from his crops for next year helps the Nation by lessening the burden on shipping. Further, in this way he makes sure of part of his own supply.

Some kinds of vegetable seed can be saved by every gardener. With others, there are difficulties that make it impossible to obtain good results ; and with a few there is a big risk of spoiling commercial crops by crossing. The following notes show what can be done with ease and safety.

A golden rule applicable to all seed production is—select seed from only the best plants.

The advice in this leaflet is basically the same as offered as best advice on seed saving offered today with the exception of tomato seed. See Saving Tomato Seed

With these crops it is particularly important that gardeners should do all they can to make sure of next year’s seed supplies, as a shortage is possible, particularly of certain varieties.

Special methods of cultivation are not necessary. For broad beans, dwarf beans and peas reserve the plants on about one-tenth the area that you expect to sow with each next year. For runner beans reserve about one-twentieth. Do not pick any of the early formed pods from these sections.

If only 1 Ib. or two of seed is being saved, leave the pods until nearly dry. The seed at this stage should be firm and tough ; pressure with the finger nail should not easily cut the skin but only dent it.

To finish the drying, pick off the pods and spread them in a thin layer in a dry, airy place. When the seeds are quite hard, shell them from the pods and store in cotton or paper bags.

If space is limited, the seeds may be shelled from the pods as soon as they are taken from the plant and dried by spreading them in a thin line on a tray. The seeds should be moved each day so that they are all in turn exposed to the air.

When dealing with larger quantities it is easier to dry the whole plants, which should be pulled up just before the pods are dry. The plants may he tied in small bundles and hung up in the air, or placed in small heaps on upturned boxes on the ground, or laid on the top of a hedge. The main thing is to see that afar circulates freely through the heap.

When thoroughly dry, the plants may be threshed by beating them with a stick on a clean floor or on a cloth.

No gardener should grow onions or leeks for seed within 250 yards of a similar commercial seed crop. There is some risk of varieties crossing with those grown in a neighbour’s garden, but this is a risk that must be accepted in war time.

Plant onion bulbs in March or April, 9 in. apart, in rows wide enough to allow of hoeing. Bury them just below the surface. Leeks may be left where they have grown or may be transplanted in early February or March.

When the plants are in flower, tie the stems to supporting canes. Onions are usually fit: to harvest by September, but leeks somewhat later.

The seed should be black and doughy, and not watery before harvesting. If the stem below the head turns yellow or some of the capsules burst open, the head is then certainly safe to cut.

Cut off the heads with 12 inches or more of stem attached, and lay them in a sunny, airy place to dry. Leeks take a long time to dry and the capsules remain tough. The easiest way to deal with very small quantities of leek is to rub the heads on a fine sieve.

If the threshed seeds and chaff are placed in water the good seeds will sink and the chaff and poor seeds will float. Do not let the seeds remain more than a few minutes in water and dry them immediately by spreading in a thin layer on a dish in an airy place.

These plants should not be grown for seed within 250 yards of a commercial seed crop.

Select good roots and transplant them in February or March. Watch for a caterpillar that may easily destroy the flowers of the parsnip. The only remedy against this pest is handpicking, for which gloves should be worn as contact with parsnip flowers and foliage
may blister the hands.

The parsnip seed should be ripe by August, and carrot seed by September. As the small clusters of seeds do not all ripen together, pick off individual clusters as they ripen. Complete drying under cover in an airy place and thresh the seeds out by beating or rubbing.

Both autumn-sown and early spring-sown lettuces can be left to seed, and there is little danger of crossing between varieties.

Sometimes the heads of lettuce develop so tightly that the seed stalk cannot grow out. Make two knife cuts at right angles across the top of the head, but do not cut too deeply as the growing stem may be injured. To prevent rotting of the head and stem, ” strip ” the plants by removing the lower leaves.

A keen watch must be kept for the moment when seed heads are ripe, as they are apt to shatter suddenly with a great loss of seed. Inspect the plants at frequent intervals and pluck off any heads which show a ” downy ” formation. This usually appears within about a fortnight of flowering. Finish drying the heads on a tray under, cover.

Leave the fruit intended for seed on the plant until it is fully ripe. The seed should be removed by hand, washed to remove surrounding pulp and dried in the sun.

If separated by a distance of 10 yards, there is no serious danger of crossing between varieties. Select good fruits on a good plant and leave them to ripen on the plant. At least 10 Ib. of tomatoes are required to produce 1 oz. of seed. Remove the seeds from the fruit with as little jelly adhering to them as possible, and spread out on a plate to dry. When thoroughly dry, scrape off into a muslin cloth and wash vigorously under the tap. Any remaining jelly will wash away from the seeds, which must then be dried.

Gardeners are strongly advised not to save seed of this group of plants owing to the ease with which they cross together. Insects or the wind may carry the pollen of these plants from place to place for up to a mile. Thus there is a great risk that one or two plants running to seed in gardens may spoil commercial crops that are being grown in the neighbourhood.

These plants also should not be allowed to seed as they are liable to cross with other plants.

LENGTH OF LIFE OF SEEDS

Well ripened, well harvested and well stored (dry) seed will remain usable for two to three years. Exceptions to this are parsnips, onions and leeks, which are generally considered reliable only in the season alter harvesting. Given favourable conditons, however, they are often usable for a longer period.

Issued by the Ministry of Agriculture and Fisheries, Hotel Lindum—St. Annes -on- Sea—Lancashire.