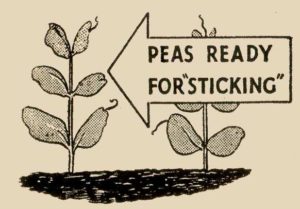 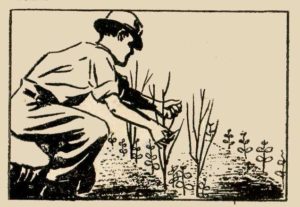 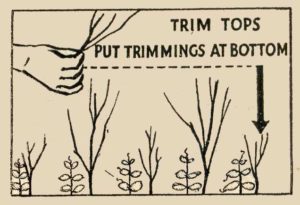 The March Guide (page 4) dealt with the sowing of peas. This is just to remind you to sow maincrop peas in April. For late crops you can sow such varieties as Little Marvel and Onward as late as June. Unless your soil is in very good heart, a top dressing of super-phosphate––2 ounces per square yard––at blossom time helps the pods to swell.

As soon as the peas begin to make their third pair of leaves, they will be ready for sticking. Even dwarf peas do better with a little support––a few twigs are all that is necessary. Before sticking, hoe the ground beside the rows and remove any plants, as they will be more difficult to get at when the sticks are in.

Don’t cross the two rows of sticks at the top, as this usually makes the plants get tangled in a mass; stick them firmly in the ground––upright. Trim the tops and put the twiggy trimmings in at the bottom by the larger sticks, so that the young plants can grasp them first before climbing on to the sticks.

Potato planting was dealt with in the March Guide (page 6). April is the month for planting varieties other than “earlies”.

Don’t forget to sow them little and often, if you like them. Sow very thinly and there will be no need to thin the seedlings. A useful idea is to sow a few radish seeds in the drills along with onions, carrots and beet. Plant one seed every 6 in. or so along the drills; they grow quickly and show you the line of the drill before the other seeds germinate. Hoeing and weeding can then begin earlier.

The Ministry’s cropping plan provides for inter-cropping three rows of dwarf peas with two rows of spinach, if you like it. Gardeners on light soils, however, find that summer spinach runs to seed so quickly unless they kept it well watered.

Some wartime gardeners may be a bit confused yet about spinach, spinach beet and seakale beet. Spinach may be sown both in spring (March to May) and late summer (August). Drills should be 1 in. deep and 15 in. apart. In autumn or early winter, spinach beet supplies leaves that take the place of spinach in autumn or early winter. It is also known as “Perpetual Spinach” and some people prefer it. The drills should be 18 in. apart. You can sow it in April and again in July.

Seakale beet is also known as “Silver Beet” or “Swiss Chard.” It is a dual-purpose vegetable. The leaf stems are large and white, but the leaf is green. You can cook the green part of the leaves as spinach and the white stalks and mid-ribs, stripped of foliage, may be cooked like seakale.

You can sow this is in April too––drills 1 in. deep and 18 in. apart. Later on, you thin the seedlings as you would with spinach or spinach beet. With the last two, you thin out to 3 in. apart in the first instance, removing alternate seedlings after about a fortnight. With seakale beet, the first thinning should be to 4 in. apart, finally leaving about 8 in. between plants.

You can sow turnips in April. But if you are following the Ministry’s cropping plan, you will wait until July, so we will deal with this crop in a later Guide.

Now is the time to plant out onions raised under glass. Harden the plants off gradually and plant them out in rows 1 ft. apart, leaving 6 in. between each plant. See that each bulb is set just on top of the ground and press the soil firmly around its roots.

A REMINDER ABOUT THE FRUIT GARDEN

In the March Guide we reminded you about spring dressings for your fruit trees and the spraying of your fruit bushes with lime sulphur. April is the time, so just turn to page 8 of the March issue and refresh your memory.