Wartime gardeners, who may have suffered badly from the ravages of pests, may well have thought that gardening is just one long discouraging fight. But the “old hands” know that is not so; they know, too, that by keeping their plots as clean as they can, and by taking early measures to cope with any marauders that may appear, they can do much to reduce their losses and keep the pests in check.

Another important step is to get rid of the things that harbour pests: weeds, surplus seedbed plants, old brassica stumps and infested leaves. Growing the same crop on the same bed year after year also encourages pests, so that is another important reason for crop rotation. And then don’t be finicky about hand-picking caterpillars when you do find them.

Some gardeners regard all creeping and flying things as foes. That is a mistake, for they include friends as well. Let us for a moment consider some of the insects you may find under and above ground. Of the “underground” enemies, there is first the wireworm: the commonest garden foe that particularly fancies potatoes, tomatoes and carrots. It is three-quarters of an inch long and has six legs. When you find it, break it in half or squash it.

Later on in life it turns into a “Click” beetle or “Skipjack”; it is called a “Click” because if you put it on its back it jumps to it with a click. If you suffer badly from wireworm, it is worth trying to trap them. An old potato makes a good trap, or three inches of old kale or Brussels stalk split down the middle. Put these traps a few inches below ground in spring, marking the spots with sticks. You can do a great deal to rid yourself of wireworm if you set traps regularly. 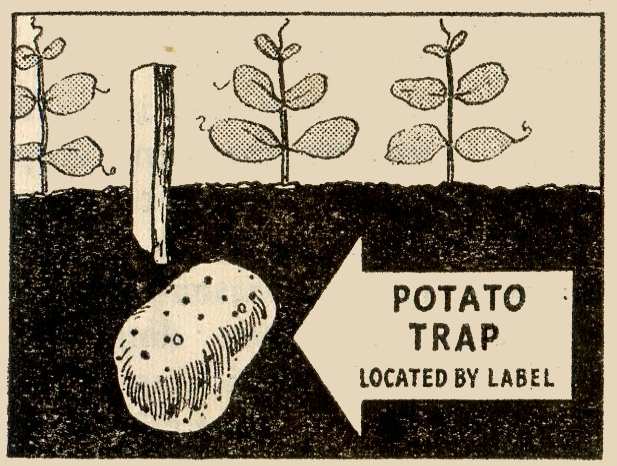 The advice on dealing with wireworms is as sound today as it was in 1945. Cutting the potato in half or even quartering large ones will produce more effective traps as it is easier for the wireworm to penetrate.

Much of the land being used for vegetables in 1945 was converted pasture. Wireworm normally live in grassland and are at their worst in the first few years after the land is converted to vegetables.

See also: Dealing with Wireworms from Supplementary Leaflet Dig for Victory 16, GARDEN PESTS AND HOW TO DEAL WITH THEM