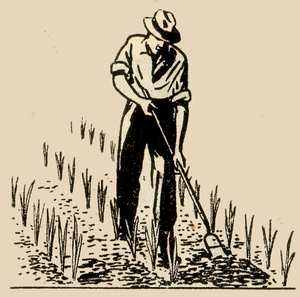 April is certainly the time for using the Dutch hoe regularly and often. Hoe freely––just the surface, not deeply––between all growing crops and on vacant ground on every favourable occasion. Try, if you can, to move all ground at least every ten days when growth is active, so as to maintain a loose surface mulch and keep down weeds.

Now here are some reminders for this month:––

In the first three issues of the “Guide” you were reminded about getting all your seeds in good time – your fertilisers, too, as well as pea and bean sticks. One “seed” item not so far mentioned is swedes. Though you can sow swedes as early as April, the Ministry’s cropping plan, which suggests two rows, recommends sowing in June. Swedes are often successful in districts where it is not so easy to grow carrots, and the field varieties resist the cold better than turnips

Swedes are usually sown in mid-June in the south, though in the north they may be safely sown earlier. More will be said about swedes in a later Guide. 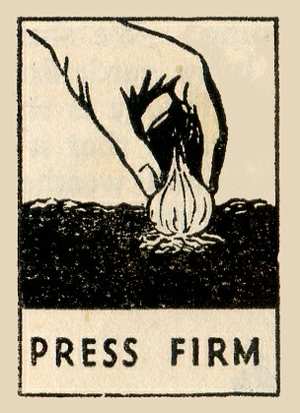 Have a look at your shallots. You may have planted them a little too loosely and the weathering may have left them almost bare of soil. Firm them in now.

Now a word or two about tomatoes. Of course, you won’t think of planting them out until the end of May or the first week in June; but if you have not done so, you would be wise to put in your order for plants with a reliable supplier.

Be warned: don’t buy plants that you see for sale much earlier than they should be. You will be disappointed if you buy them.

And what about Brussels sprouts? These need a long period of growth. If you have not sown seeds in the seedbed and you intend growing them, you should order your plants so that you are not caught napping when you want to plant them out in May or June.

And now is the time, if you have not already done so, to clear away those old cabbage and other green stumps that may be taking up ground that should be cleared and dug over ready for a following crop. For one thing, these old stumps harbour pests; but, even more important, if you let them stop until they flower, you may well do harm by cross-pollination to the crops of the professional man who is growing them for valuable seed.

Now for the seed-sowing jobs of the month, remembering that a few days before sowing or planting (except on the seed bed) 1 lb. of a good complete fertiliser––”National Growmore” for instance––should be scattered evenly over every 10 sq. yds. and raked in.