Of the insecticides listed here, in use in 1945, metaldehyde is still available and in common use although Ferrous Phosphate slug pellets are arguably better environmentally.

Nicotine is highly poisonous to mammals (including people) as well as all insects, friend and foe alike. Gardeners making up nicotine sprays sometimes stored the liquid in unmarked bottles which presented a risk to inquisitive children. There were some deaths in that way.

You may come across recipes for making a nicotine insecticide by boiling up cigarette ends. This is just as poisonous and indiscriminate as the solution referred to below. Nicotine is not an approved insecticide nowadays for good reason.

Calomel contains mercury and is now banned. However, Calomel is an insoluble salt, and reputedly only infinitesimal amounts of the mercury in calomel are absorbed of it is ingested.

Napthalene, the active ingredient in old-fashioned mothballs is now banned

Another wretched pest is the cabbage aphis––the nasty greyish powder patches of insects that you may find on your plants. 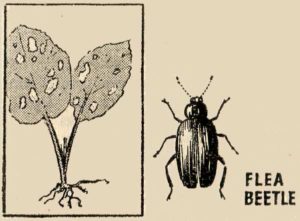 And then you may find holes in your young turnip leaves or in your young cabbages. They are the work of the flea beetle, which hops about so quickly that it is difficult to catch sight of. It eats the plant before it pops its head above the ground and keeps on with the foul work after the rough leaf appears.

Now here are the measures you are recommended to take for dealing with the most important pests that may come your way, though it is to be hoped they won’t. And remember that early action may save you a lot of bother later on. 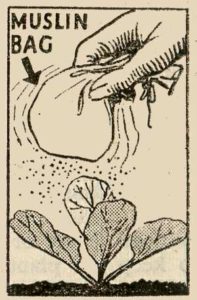 There is a good organic method of getting rid of flea beetles. Take a piece of cardboard and thinly spread treacle on it. Wave the card through the affected plants and the beetles will jump. Those hitting the board are stuck and can be fed to chickens. 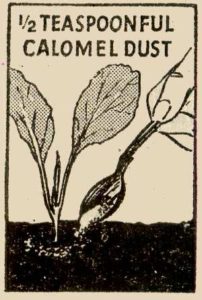 Prevent attack by putting ½ teaspoonful of 4 per cent. Calomel dust on soil around each plant as soon as set out. Repeat a fortnight later.

Collars are just as effective

Spray with Derris or Nicotine wash. If sunny and warm, dust with Nicotine Dust. Destroy all old cabbage stumps before mid-May.

There are a wide range of organic solutions to aphids and greenfly. Just a wash with soft soap is often enough to keep them down until the ladybird’s arrive to eat them up.