These may be stored for winter use as vegetables and for preserving. Only fully developed and ripened fruits should be set aside for storage, and they should be handled carefully to avoid bruising the skins. 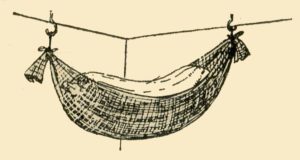 Being very susceptible to low temperatures and easily damaged by frost, these fruits need a warm, dry atmosphere, such as that of a kitchen, bedroom or attic, to ensure successful storage.

Cellars and outside sheds, and other damp places where the temperature is likely to fall below 45 °F., are unsuitable. From 50 to 65 °F. is the most suitable temperature for storage. The fruits may be placed in crates or boxes, or laid out singly on shelves, but they are best hung from the ceiling in nets.

Given this treatment, they can usually be relied upon to keep in good condition until January or February.

The harvesting of carrots, beet and certain other root crops will be dealt with in next month’s Guide. 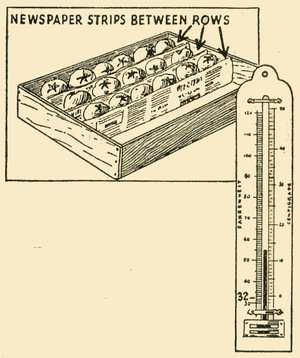 Mature tomatoes which are not ripened by the time the autumn frosts are coming on, may be stored separately in such receptacles as trays or box-lids, lined with a few layers of newspaper, which will help to make sure that the fruits remain where placed. Arrange the fruits in a single layer so that they do not touch one another. If there is any risk of touching, separate the rows by strips of newspaper. Do not store any split, bruised or otherwise damaged fruits.

Store the tomatoes in the dark; but if you wish to hasten the ripening of some fruits expose them to the light at a temperature of 60-65 ° F. Storage in the dark tends to prolong the period of storing, and so the period during which tomatoes are available may be appreciably extended.

Examine the fruits from time to time, and remove any that have ripened or any that begin to show signs of decay.

Storing tomatoes in peat or sawdust is not recommended. Sawdust sometimes imparts an unpleasant flavour, and both peat and sawdust are difficult to maintain at the right degree of dryness.

It should be remembered that though very dry conditions may cause shrivelling, appreciable moisture favours the growth of moulds, which will develop quickly under the slight warmth that is otherwise conducive to the keeping of tomatoes. For this reason, storing in the moist warmth of the kitchen is inadvisable.

Green, immature fruits may be used for chutney and pickles.