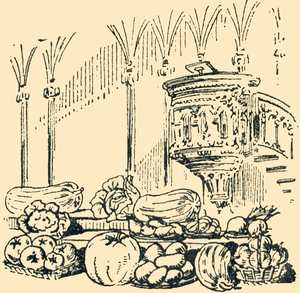 Like the squirrel, the gardener who has done his job well can indulge in a satisfied smile in September, when he surveys the fruits of his labours and decides on those “O.S.” fruits and vegetables that will represent his household at the church or chapel harvest festival, tokens of his appreciation of the world-old partnership between Providence and man.

Assuming the weather has not been too unkind and the pests not too troublesome, he can smile at the abundance that will be his squirrel’s store for the late autumn and winter days that lie ahead. So it is natural that this issue of the Guide should be concerned mainly with harvesting and storing

Problems with the potato crop the year before had led to shortages in 1945 and it was critical that this years harvest be handled properly and that crops be stored properly. The public had, for the most part, accepted rationing and constraints whilst the war was on but now they felt things should be returning to normal. A reduction in the ration and hunger now would not be easily accepted.

The term “O.S.” used above stands for Operational Surplus – by 1945 many military terms had crossed over into the general language. Other common military terms that became commonplace were “U.S” for UnServiceable and chalking “MT” on a can or barrel was to indicate it was empty.