Harvesting your own saved SEED

In the July Guide there was a section devoted to saving your own seed, and we promised that in a later issue we would tell you how to harvest it. The only “safe” vegetables for seed saving by the amateur are peas, beans, onions, leeks, tomatoes, lettuce, ridge cucumbers and marrows, so this note will be restricted to them. 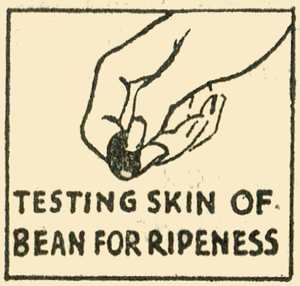 If only a pound or two of seed is being saved, leave the pods until nearly dry. The seed at this stage should be firm and tough ; pressure with the finger nail should not easily cut the skin but only dent it.

To finish the drying, pick off the pods and spread them in a thin layer in a dry, airy place. When the seeds are quite hard, shell them from the pods and store in cotton or paper bags.

If your space is limited, the seeds may be shelled from the pods as soon as they are taken from the plant, and dried by spreading them in a thin layer on a tray. Move them each day so that they are all exposed to the air in turn.

Onion seed is usually fit to harvest by September, leeks in October. The seed should be black and doughy, not watery, before harvesting. If the stem below the head turns yellow, or some of the capsules burst open, the head is then certainly safe to cut.

Cut off the heads with 12 in. or more of stem attached, and lay them in a sunny, airy place to dry. Place the onion heads in a bag since the dry seeds easily fall out.

Leeks take a long time to dry and the capsules remain tough. The easiest way to deal with very small quantities of leeks is to rub the heads on a fine sieve. If the threshed seeds and chaff are placed in water, the good seeds will sink and the chaff and poor seeds will float. Do not let the seeds remain more than a few minutes in water; dry them immediately by spreading in a thin layer on a dish in an airy place. 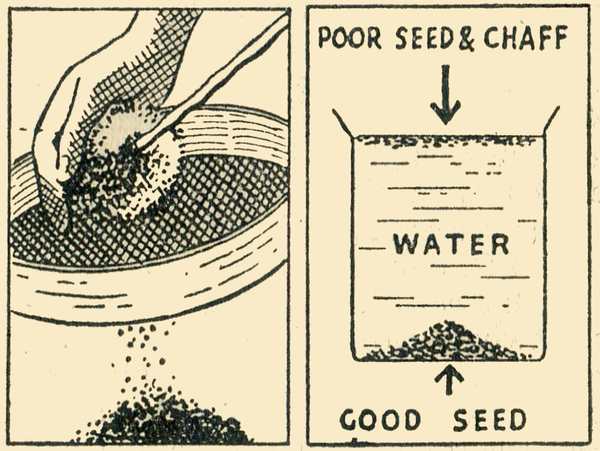 At least 10 lb. of tomatoes are required to produce 1 oz. of seed. Remove from the fruit the pulp containing the seeds and put it in a jar to ferment. After two or three days, tip it into a fine sieve and wash it vigorously under the tap ; the pulp will wash away from the seeds, which may then be spread on muslin to dry.

Keep close watch for the moment when the seed heads are ripe, since loss of seed results from shattering and from the ravages of birds. Inspect the plants at frequent intervals and pluck off any heads that show a “downy” formation. This usually appears within about a fortnight of flowering. Finish drying the heads on a tray under cover.

Leave the fruit intended for seed on the plant until it is fully ripe. The seed should be removed by hand, washed to remove the surrounding pulp and dried in the sun.