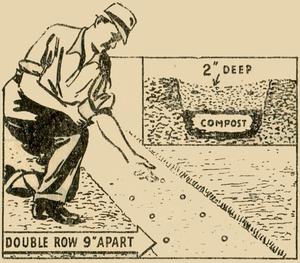 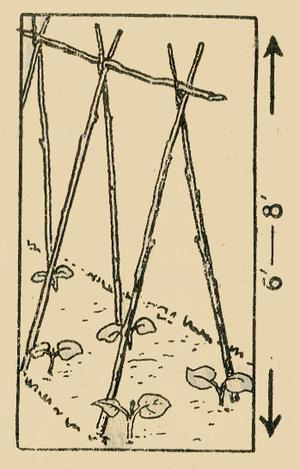 Runners do best on soil well trenched and given a good dressing of manure or compost, as advised in the February Guide (page 8). Clay soils are usually too wet and cold for them.

One pint will sow a double row of 50 ft. The plants are very tender and seeds should not be sown in the open until May, though early crops may be secured by sowing in boxes in a frame or a greenhouse and transplanting later. In the open, sow the seed in double rows with 9 in. of space between the plants. For single rows, the plants should stand 12 in. apart.

If you have double rows, it is an advantage for staking to put the plants opposite each other. It is a mistake to overcrowd runner beans. Seeds are best sown in a trench and should be placed 2 in. deep. Don’t forget to sow a few extra at the end of the rows to fill up gaps in the rows.

Runner beans produce best when supported by stakes or some other contraption that allows them to climb ; they can also be grown as dwarf plants by pinching out the growing shoots as they appear, but the yield will not be so heavy.

Stout, straight stakes 6-8 ft. long, without branches or twigs, are best for runner beans. Stakes are inserted against each plant and slightly inclined so that they cross at the top, allowing for a cross stake to be fixed as illustrated.

During dry weather, runner beans derive great benefit from watering; in fact, drought is often responsible for the flowers dropping and failing to set. To induce a good set it may be necessary to syringe the flowers with water. Keep the beans closely gathered as they mature, so as to prolong cropping.

Choose a sunny corner for your marrows, digging in some well-rotted manure or compost into the bottom of the bed, which should be taken out one spit deep. Sow towards the end of May, placing groups of four or five seeds about 6 in. apart and 1 in. deep. Eventually thin to two plants, 12 to 15 in. apart.

Take care not to let the young plants suffer from lack of water; give them plenty in dry weather and hoe regularly to keep the bed free from weeds. 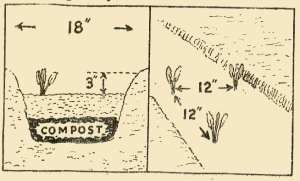 If you want to grow celery (and you have not been able to sow seeds in heat), you should buy the plants ready for planting out in late May or June. Celery likes richly prepared ground.

Dig out a trench 18 in. wide and 1 ft. deep, and fork in manure or compost into the bottom of it, returning the soil to within 3 in. of the level of the ground. Set the plants carefully in staggered double rows 1 ft. apart 10 to 12 in. between plants.

Water them in and give them plenty of water when the weather is dry. Dust with soot at intervals, as a prevention against leaf maggot. Earthing up will be dealt with in the June Guide.

Some people like celeriac—a turnip-rooted celery—for flavouring stews. You may like to try a row as an experiment. Plant in shallow drills 18 in. apart, 12 in. between plants. Celeriac also needs plenty of water in dry weather. Remove side shoots as they appear and hoe regularly.