It is important that during the period of active growth your potato plot should be hoed and kept free from weeds. If there is a danger frost when the young plants appear, cover them lightly with soil. 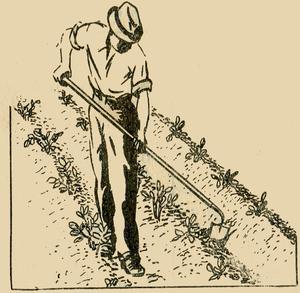 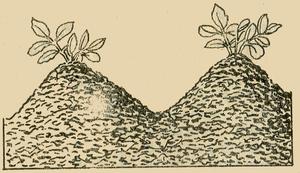 The first earthing up should be done when the plants are some 6 in. high, and further soil should be drawn up to form a ridge about three weeks later. But don’t cover up the leaves this time—they need all the light and air that they can get.

Earthing up helps to keep the haulms upright, and prevents the tubers from being exposed to the light, which would make them go green. Incidentally, a good covering of soil over the tubers protects them in case of an outbreak of blight on the foliage. Blight spores don’t work down the stems to the tubers. as some people think ; they drop from the haulm directly on to the soil.

So make your ridge as illustrated ; don’t leave a very pronounced furrow at the top, into which rain may wash the blight.

Both peas and beans specially need moisture to produce a good crop. In very dry weather, instead of watering, spread grass mowings, decayed leaves or compost to a depth of 1 in. along each side of the rows.

Mulching as described also has the benefit of inhibiting weed growth, making life a little easier. I would advise watering well before mulching, the mulch will keep the moisture in the ground. Any rain will soak into the mulch and then the soil rather than running off if the soil surface has baked dry.

Do be aware that mulches can encourage slugs. If you’ve a big slug problem on your plot you will need to use pellets, nematodes or traps to avoid unacceptable levels of damage.

Very young plants, such as lettuce and spinach, will appreciate a top dressing of sulphate of ammonia—about ½ oz. to the yard run.

Sulphate of Ammonia is a high nitrogen fertiliser (20:0:0) which will encourage leaf growth but it can also cause soft, sappy growth which is vulnerable to attack – and attractive to – aphids. Personally I wouldn’t follow the top dressing advice.

Greens for the Seedbed

May is the month for sowing in the seedbed seeds of sprouting broccoli (mid-May), winter cabbage (also mid-May), kale and savoy (late May). How to use a seedbed was described in the March issue of this Guide (page 3).