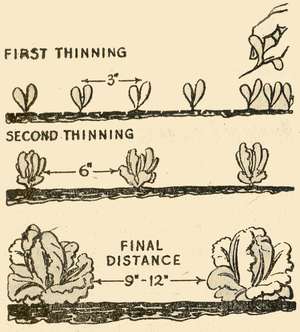 Begin in March to sow very thinly in drills, half a row at a time, 1/2 in. deep, the rows being 1 ft. apart. Continue to sow at fortnightly intervals until July.

March-sown lettuces attract slugs, so lime the surface as a deterrent.

Thin the seedlings when the first pairs of true leaves are well formed. The final distance apart should be from 9 to 12 in.

If you like radishes, you can make a small sowing in March (1/2 in. deep) and follow up with sowings about every three weeks until May, to keep up a continuous supply.

Make a sowing of parsley in March (1/2 in. deep) and a second sowing in July for succession. Thin seedlings to 3 to 4 in. apart.

Parsley is a crop that has a reputation for being difficult to germinate. Starting in pots indoors is far more successful but there is an old gardening tip to improve germination for outdoor sown parsley. Pour boiling water down the row just prior to sowing. This sterilises the soil that is in contact with the seed.

The Ministry’s cropping plan provides for eight rows of onions. There are three ways of growing them for storage:–

By sowing in boxes, seed can be made to yield the maximum number of plants. The second method is popular and can be freely practised almost anywhere; but where soils are difficult to work or onion fly is troublesome, the other methods are recommended.

The onion bed must always be carefully prepared whatever method you use. Soil should have been dug early (before Christmas) and manured liberally. Firmness of soil is essential. 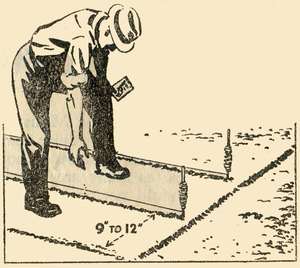 Early sowing is also important, and the bed should be prepared as soon as soil is dry enough to work in February or March, that is, when it does not stick to the boots. Tread it both ways and rake level, removing all large stones.

The seed drills should be drawn 9 to 12 in. apart and about 1 in. deep. Sow seed fairly thinly and evenly and cover it with earth with the feet or back of rake. The soil requires to be gently consolidated by another light treading or by using a light roller. 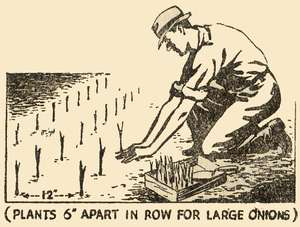 Onion seed is rather fickle; it may germinate well or badly, and quickly or slowly according to weather conditions; but 1 oz. of seed should be sufficient for at least 100 feet. As a rule, it takes about three weeks to come up.

It is a good plan to mix with it a little radish seed; this will germinate quickly and mark the rows, making it possible to cultivate and weed between them before the slower germinating onions come through, when the radishes can be pulled for salad.

Autumn-sown onions should be transplanted in early March on to the prepared onion bed. Plant (see illustration) in rows 1 ft. apart with about 6 in. between plants (for large onions).