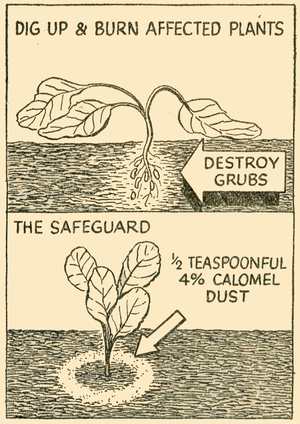 It is infuriating to go out one evening and find your cabbage plants suddenly wilting one by one.

On digging up one of them you will probably find white grubs feeding on the roots.

They are the grubs of the cabbage root fly; once the plant is attacked the only thing to do is to dig it out and burn it.

The right thing to do is to apply a ring (½ teaspoonful) of 4 per cent. Calomel dust round each young plant of the cabbage family as you plant it out. This will put paid to the trouble.

Calomel contains mercury and is now banned. However, Calomel is an insoluble salt, and reputedly only infinitesimal amounts of the mercury in calomel are absorbed of it is ingested.

Placing collars around the plant is an effective – and organic – method of control.

The Turnip Flea Beetle may also be on the warpath, eating holes in your cabbage and turnip plants. It has caused gardeners trouble for centuries and is most troublesome during dry weather.

Some old hands believe in the cold water cure, and give the plants a good soaking every night until they are about 6 in. high. But that’s not possible on some allotments, so derris, nicotine or napthalene dust should be used, as recommended in the April Guide. And dust often till the leaves are well formed.

Nicotine is highly poisonous to mammals (including people) as well as all insects, friend and foe alike. Gardeners making up nicotine sprays sometimes stored the liquid in unmarked bottles which presented a risk to inquisitive children. There were some deaths in that way.

You may come across recipes for making a nicotine insecticide by boiling up cigarette ends. This is just as poisonous and indiscriminate as the solution referred to below. Nicotine is not an approved insecticide nowadays for good reason.

Napthalene, the active ingredient in old-fashioned mothballs is now banned

And don’t forget that what you do—or fail to do—this month, will determine how well or badly off your family will be for winter greens in the lean period from next February onwards (see page 6).

Now having made up our minds to keep going at the job, let’s have a look at some of the things we might do about our growing crops, before we get on to further sowings and plantings.

We shall probably need to be economical again this summer. It is difficult to lay down hard and fast rules about watering vegetables, and the gardener must use his own judgement.

Newly transplanted seedlings may suffer seriously if water is withheld. But established plants may suffer if watered only at irregular intervals. Once you start watering you must carry on, so if the plants are holding their own in a dry spell, it is unwise to begin widespread watering unless you can do it regularly.

Assuming the water supply situation is reasonably good, crops that specially benefit by watering are runner beans,celery,marrows (specially on mounds) and tomatoes.