Here are some reminders of the things to do in case you have not already done them.

GET YOUR SEED CATALOGUE

If you want a catalogue, write to your seedsman, for he is still not allowed to send you one unless you do. And order your seed potatoes and vegetable seeds in good time, not just before it is time to put them in – or you may be caught napping.

You can work out the quantity you will need fairly easily if you remember that seed potatoes usually average 5 or 6 tubers to the pound, and that a convenient distance to plant early varieties is a foot apart ; other varieties 15 inches apart. 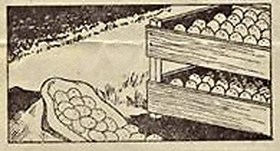 Yields from allotments and gardens are usually less than from an equal area of potatoes on the farm. One important cause is unsatisfactory seed. No amount of manure or good cultivation will make up for the initial disadvantage of poor seed. It is unwise to save for seed potatoes grown in allotments or gardens.

So get good seed carrying a “Health” certificate issued by one of the Agriculture Departments. That is your safeguard. Consult some knowledgeable local grower about this and about the varieties best suited to your district. Here are some selected varieties for your guidance :––

As soon as you get your seed potatoes, place them in shallow boxes with the crown or rose end upwards, and keep in a cool, dry place with plenty of light, but frost-proof. Make quite sure by covering in severe weather. Sprouting potatoes makes for earliness and high yields. “Dig for Victory” Leaflet No. 12 will give you more detailed information about seed potatoes 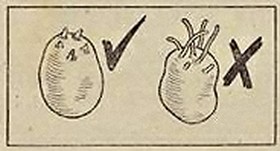 The advice not to use saved seed is surprising considering the strictures of wartime. On the other hand they may have felt that the risk of spreading disease around wasn’t worth it. Seed potatoes were grown in Scotland where the lack of disease transmitting aphids ensured a healthy, disease-free crop.

It’s interesting to look at the varieties mentioned. Of the First Early Potatoes listed the following are still readily available. I’ve put the year of introduction with each variety: Epicure (1897), Arran Pilot (1930), Sharpe’s Express (1900), Duke of York (1891).

May Queen and Ninety-Fold no longer seem to be listed. One glaring omission from the list is Home Guard (1942). This was promoted by the Home Guard and became a big commercial success. It’s still available today.

From the Second Early Potatoes, Dunbar Rover (1936) is still available. It’s a surprising one to list as it is quite low yielding.

Of the maincrop potatoes, these are still available: Majestic (1911), Arran Banner (1927), Kerr’s Pink (1917), Up-to-Date (1894), Arran Victory (1918), Dunbar Standard (1936).Majestic was a very popular variety in the war and extensively grown along with Arran Consul which is still one of the best keeping potatoes you can grow. I believe King Edward VII is the same potato we know as just King Edward.

Gladstone, Redskin, Arran Peak are no longer to be found.