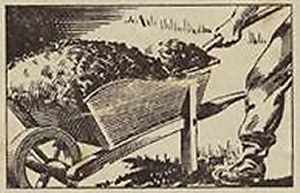 “Organic” manures usually provide essential plant foods, the three most important being Nitrogen, Phosphate and Potash. Plants need a balanced ration of these foods. They take them in, dissolved in soil water, through their roots. Most soils contain a certain amount of them. But if the plants are to get enough, you must keep up the supply by manuring the soil. You can do this most effectively by using both “organic” manures and mineral fertilizers – popularly called “artificials”. 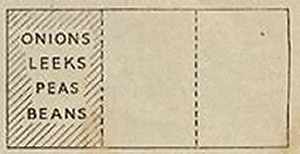 But, you may say, farmyard manure is very scarce and most difficult to get. That is true; but you can make compost yourself (Dig for Victory Leaflet No. 7 tells you how – it is free), though maybe you could not make enough from your garden waste to supply all the needs of your land in one season. So it is a question of using wisely what little manure you can get or the compost you can make.

If you manured about one-third of your land with farmyard manure or compost every year and practised crop rotation (as recommended in the Ministry’s free cropping plan), you would go some way to keeping your soil in good heart. The one-third of the plot most suitable for this treatment is the part where you are going to grow your onions, leeks, peas and beans.

Now a word about “artificials”––or, what is a better term, “mineral fertilizers”. The use of the word “artificials” makes some people thank that “artificials” are not as good as “organics”. Both supply exactly the same kind of plant foods in different quantities. The “organics” generally rot down slowly and so supply steady though small amounts of plant foods during the whole of the plant’s growing period.

The well-known Sulphate of Ammonia, which comes from gas works and coke ovens, is a good source of nitrogen. Superphosphate, made from rock, is rich in phosphate; basic slag, which we get from iron works, also contains phosphate. Potash is dug out of mines in France and Germany.

To meet the needs of gardeners, the Government arranged for the supply of a good standard fertilizer at a reasonable price. It is called “National Growmore Fertilizer” and contains the three important plant foods––the analysis being 7 per cent. N. (nitrogen), 7 per cent. P2O5 (phosphate) and 7 per cent. K2O (potash).

It should be remembered that a lot of new land was being brought into food production and most of it was poor quality and nutrient deficient. National Growmore which is still commonly available today as Growmore was a sensible, pragmatic reaction.

Testing for nutrient levels on small plots was impractical as the tests were complex and required a laboratory. Providing a basic mix of the ‘big three’ nutrients covered the majority of requirements. Standardisation of product reduced costs and made it easier to advise how much to use.