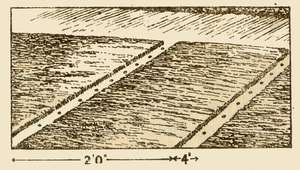 The earliest and often most successful crops of broad beans are obtained by sowing in autumn (but not in the North, unless protected by frames or cloches): but a second sowing can be made during February. The broad bean does best on land manured for a previous crop, such as potatoes.

The spacing recommendation for broad beans has changed to double rows 2 ft. apart with the beans  spaced at 8″ each way in the double row. 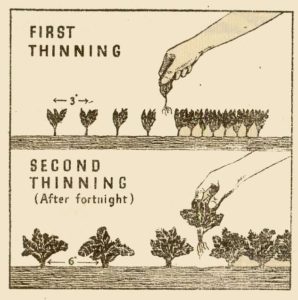 The Ministry’s cropping plan suggests that summer spinach (for those who like it) should be sown in mid-April. But if you wish, you can make successional sowings from February to May in drills 1 in. deep and 12 in. apart.

Thin out the plants as soon as they are large enough to handle, first to 3 in. apart, removing alternate plants about a fortnight later. You can cook these thinnings.

On light soils spinach runs to seed fairly quickly in hot weather, so hoe regularly and water freely at such times, if you can.

Shallots are easier to grow than onions and some gardeners prefer them for that reason; in fact, shallots are a sort of hardy perennial onion grown annually from small bulbs or “sets”. You can also grow shallots from seed, but these bulbs are really small onions and are useless for replanting and should be used up each year. 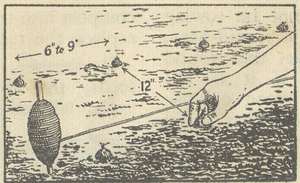 The Ministry’s cropping plan for a 300 square yard plot suggests two rows of shallots to be planted in February. Sets of medium size (20 to 25 to the lb.) should be used and each set should produce five or six large bulbs. 2 lb. of bulbs should be about enough for one row of 30 ft.

Plant in rows 1 ft. apart and 6 in. or 9 in. between the bulbs, leaving the top of each bulb just showing above soil level. Crops are usually mature by early July and should be taken up, carefully dried and stored.

Save, for replanting, sufficient medium-sized bulbs from strong, healthy plants (mark them with a stick during the growing season). Avoid using bulbs from plants that have made but poor growth and may show yellow and green mottled leaves which suggest virus disease.

The spacing recommendation for shallots nowadays is 6″ apart in rows 8″ apart. 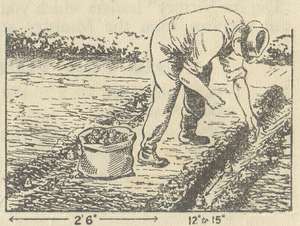 While the Ministry’s plan does not suggest artichokes, your family may like them. And if you keep poultry or rabbits they will like them, too. Another good point is that you can grow artichokes in any odd corner, and they can be useful to screen a shed or the manure or compost heap. Though they can put up with rougher conditions than most vegetables, they will repay for good cultivation.

You can plant artichoke tubers in February or March in drills 6 in. deep. Set the tubers 12 in. to 15 in. apart, leaving 2 ft. 6 in. between rows. When the plants appear, hoe between them and draw the soil towards them. You cut the tall stalks down in early winter, leaving the tubers in the ground and lifting as you need them. Keep a number of tubers for replanting to provide a supply for the following year. Though artichokes are perennial and can be left in the ground several years, it is well to lift and replant a section every year so that the land doesn’t get weedy or overcrowded.

Do you grow RHUBARB?

If you do, February or March, when growth is starting, is the time to divide old roots, using a sharp spade or knife, and cutting so that each piece contains at least one or two good buds. Rhubarb likes deeply-dug and well-manured ground (use compost if you cannot get manure), for the plants usually have to stay put for several years.

Plant in a sunny spot about 2 ft. apart, and do not pull any of the stalks from plants divided this year.