About 300 years ago, a scientist planted a willow shoot weighing 5 lb. in a barrel holding 200 lb. of dry soil. for five years he gave it nothing but pure water. He finished with a fine tree weighing over 169 lb. : and the soil had lost a trifling 2 oz., so he concluded that water was the “principle of vegetation.”

Other scientists have since found it isn’t quite as simple as that, but none of them has grown a plant without water. In fact it takes anything up to 1,000 lb. of water to produce a single pound of plant substance. 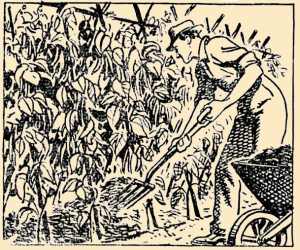 Plants are just as thirsty in August as human beings are, though they are unable to trot into the kitchen or down the road. But they do have roots able to draw on the available moisture in the soil. It’s up to us to see that the moisture gets to the roots and not into the warm air.

Much can be done by timely hoeing to stop the soil cracking when it has been beaten down by heavy rains or watering. But a better way to keep the roots of peas, runner beans and tomatoes supplied with moisture is to spread a layer of half-rotted manure with plenty of straw in it, well-rotted compost material, or even decayed lawn-mowings, between the rows and around the plants. This is a mulch, but it is next to useless if you put it on already bone dry soil. Seize the moment after a fall of rain, or if the rain fails, give the ground a good soaking.

See that the mulch is open in texture : heavy impenetrable stuff keeps the air from the soil and may even tend to sour it. Watch your lawn-mowings specially. Mulching also helps to keep down the weeds.

By this time in the year the patient gardener is prepared—or he should be— for anything in the nature of pests.

This month’s particular unpleasantness may take the form of Cabbage Aphis on the members of the cabbage family. It is easy enough to recognize. Leaves begin to curl or crinkle ; part of the leaf turns a paler green, and on the underside of the crinkled leaf is a mass of greyish-blue, powdery-looking insects busily sucking the vitality out of your plants and crippling them.

If these pests find their way into growing hearts of your young kales, sprouts or other green stuff, they may check the plants so badly that the crop will be very poor. You will probably find too that the Aphis has discovered your seedling rows of greenstuff.

The best remedy is to spray with a good nicotine insecticide, preferably one that contains soap or some other substance that acts as a “spreader” and keeps the nicotine on the leaves. 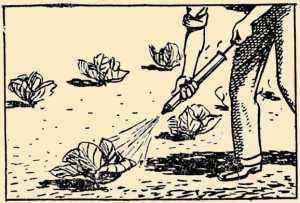 Force the spray well into the hearts of the plants. Where there are large colonies, it is worth while squashing the insects with finger and thumb before spraying—if you can “take it.” It is a messy business, but half measures are no good.

Later sprayings at intervals of a few days will probably be necessary. The secret of control is to spray, early enough and often enough.

Nicotine and nicotine preparations are poisonous. Be sure to follow maker’s directions. On Summer Cabbage almost ready for cutting, or other vegetables intended for the table within ten days, use a derris spray instead.

Please see this page on Insecticides then and now