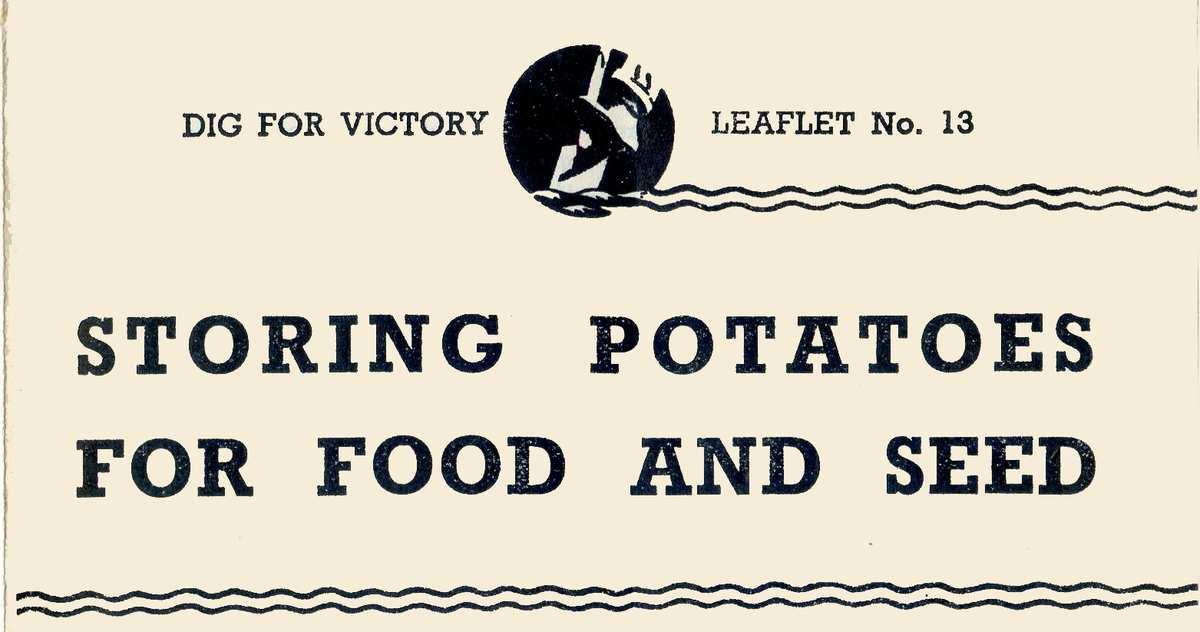 STORING POTATOES FOR FOOD AND SEED

Every care should be taken to prevent the exposure of seed potatoes to cold ; for even at a temperature not low enough to kill the tuber, the more tender eyes may be killed.

Scotch, Irish, English, and Welsh seed, certified true-to-type, and with a Health Certificate, normally give the best results. Once-grown seed, that is, seed grown once from certified stocks, and preferably from the north of the country, comes next in importance. Seed from these two groups is to be preferred, however cheaply other seed might be purchased.

Given that the quality of seed potatoes available in the war and the following decade in terms of disease was not as high as today, that would be good advice, But today the quality of seed is far superior. Using your own seed saved from the previous year can be done successfully. This saves the cost of new seed tubers, of course.

However, it is critical that the stock is of good quality and disease free. It is unlikely that home growers south of Scotland will be able to maintain disease free stock beyond the third generation.

If it is intended to save tubers for seed purposes, the best course is to lift all weak and unhealthy plants as soon as possible, leaving only strong vigorous plants from which to select the seed. These should then be lifted before they mature, since immature tubers make the best sets. The reference to ” Blight ” disease and the treatment of the tops made earlier in this leaflet should, however, be specially borne in mind.

Seed tubers should be placed crown or ‘ rose ‘ end uppermost in shallow boxes or trays, or on shelves one layer deep, in a frost-proof, cool place, where they get as much light and air as possible. Tubers so ” boxed ” develop two or three strong, green sprouts instead of a large number of weakly shoots, as happens when they are pitted or kept in the dark.

Tubers about the size of a hen’s egg and of not less than 2 oz. in weight will make good seed, though larger tubers may also be used. Wherever possible, the seed should be placed in boxes, in a single layer, or not more than three layers deep, if this is necessary, and the boxes stored near the light in an airy, but frost-proof place, such as a shed, outhouse, or disused room of a dwelling house.

Where the quantity is too large for the seed to be treated in this manner, it must be clamped. When the clamp is opened in the spring, any sprouts that have been formed should be removed and the tubers thereupon boxed. It is better to prevent seed potatoes from sprouting until they are boxed and placed in the light. The sprouts formed first give the best results.

Issued by the Ministry of Agriculture and Fisheries, Hotel Lindum—St. Annes – on – Sea—Lancashire.