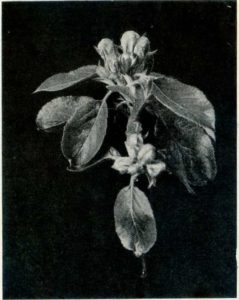 Between the beginning of December and the end of January, the trees should be sprayed once with a tar oil spray mixed in the proportion of 1/2 pint to 1 gal. of water. In some districts, spraying can safely be carried out at a later date, but local advice should be sought on this point. This spraying cleans up the trees and destroys many insect pests.

Emulsions of di-nitro-ortho-cresol and petroleum oil (known as D.N.C. winter washes) may be used in place of the tar oil spray and can be applied as late as the first half of March. They should be mixed with water according to the maker’s directions.

Petroleum oil emulsions are also effective for certain purposes. Growers who wish to use winter washes other than tar oil wash and are unfamiliar with them, should first obtain advice.

Many varieties of apples and pears suffer severely from Scab (which produces black spots on the fruit) unless they are sprayed. The use of lime sulphur, 1/2 pint to 3 gal. water, is recommended

Notes. Do not apply lime-sulphur spray to the following varieties of apples: Beauty of Bath, Stirling Castle, and St. Cecilia. It is not worth while spraying Charles Ross and Lord Derby, since they surfer little from scab. If you cannot identify the varieties of apples in your garden, take the risk and spray all the trees. 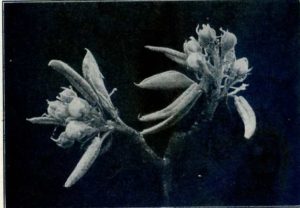 In north-western areas, lime-sulphur spray should be used at one-half the strength, viz., ¼ pint to 3 gal. of water.

A single lime-sulphur spray gives a fair control of Scab,but for a more complete control a further spraying after the flower petals have fallen is desirable. This second spray, how­ever, is likely to cause injury to some varieties, and if it has not been used before, advice should be sought.

Similarly ” post-blossom ” sprays are required for certain pests, e.g., Apple Sawfly and Red Spider, but unless the grower is familiar with the necessary treatments he should obtain advice before giving a post-blossom spray for these pests.

(1) Codling Moth. Apples, and to a less extent pears, are often badly attacked by the caterpillars of the Codling Moth, which are responsible for the maggoty fruit found at picking time.

In private gardens, the pest is best dealt with by banding the trees cowards the end of June or early July with a band of folded sacking or corrugated paper. The band should be 4-6 in. wide, and be tied round the trunk a foot or so below the lowest branches.

A second band may be tied on lower down. The bands must be removed and burned after the fruit has been gathered, care being taken to destroy all maggots on the trees under the bands.

(2) Winter Moths, The foliage of apple and other fruit trees may be seriously damaged by the caterpillars of these moths. To prevent this, band the trunks of the trees in early October as follows.

Tie firmly round the trunk 3-5 ft. from the ground, a piece of grease-proof paper 8 in. wide, and apply to the paper a layer of ” grease-banding ” compound) so as to form an unbroken ring about 6 in. wide ; the compound should be purchased ready for use—some preparations are stated to be suitable for application direct to the bark.

The females of the moths have no wings, and so can not reach the branches to lay their eggs.